Was so good to present at HOPE (Hackers On Planet Earth), at first I was super skeptical thinking that my research wouldn’t fit with the conference’s audience but the people who went to see me were so nice and supportive, many new ideas emerged, even one of my idols of posthumanist studies was watching me on the streaming. I’m super grateful for that experience.

This is a sort of transcription of my presentation, part notes, part slides, part video.

Hello all, thank you for coming to my talk “the hacker and the shaman, travelers of the black box”, this is a comparative analysis between these two figures, I will talk about their similarities and how their exploratory approaches can be related to the concept of “black box”.

First, I would like to introduce myself very briefly so you know where I’m coming from. I’m a working-class feminist writer, I was born in Chile and in 2012 moved to the UK to study at the University of Bristol, now I live in Rotterdam where I’m a postgraduate research student on literary studies. The topics of my research are posthumanist literature, altered states of mind and the cyberspace.

But to study all this stuff I needed money since my family is poor and they were never able to afford this kind of elitist education, that’s why I’ve been working since I was very young, first as a web developer in Santiago and then as a project manager and researcher in advocacy organisations dedicated to the internet and human rights in Chile and in Brazil. Now I’m working at the Mozilla Foundation and I’m also a member of the Riseup Collective where we provide secure communications channels for social justice.

This is my second time at HOPE.

It hasn’t been easy but I think that after all these years I learned a thing or two about the internet. And I’m progressively more interested in its artistic, literary possibilities and how it can become a source for posthumanist thinking rather than this boring completely surveilled space that is today.

Now let me tell you about how this research originated. This started as a masterclass project at the Utrecht University in the Netherlands, the topic of this seminar was the black box, in a group of four researchers each of us explored one aspect of the subject, this also involved a plan for an artistic exhibition.

I’m telling you this so you know that this is an academic effort with a visual art component, but for this talk I’ll try to adapt my language and perspective to this tech-audience, also please bear in mind that I’m not a technologist and that my main intention is to invite you to look at this with a literary-artistic lens.

-what is a black box-

This diagram is vastly used to explain what a black box is. We have an input that goes to the black box, then in the black box something happens and we get an output.

If I send a text message to a friend I don’t really now what happens in the middle but he or she will certainly receive the message in her cellphone, also without knowing exactly what happened in the middle. This obscure set of transmission between devices is the black box.

But many researchers for example Peter Sloterdijk use the concept of black box not just for complex machines, the human soul and the human body could be considered a black box too, for instance I can watch a fantastic film like Andrei Tarkovksy’s Andrei Rublev, which I watched last week and can’t stop thinking about it. I cannot explain very well all the emotions that the film provoked in me, also the viewing experience I had in this big beautiful cinema in Berlin, I really think it changed me as a person. In this case the film is the input, my mind is the black box and the output is the new me and all the stuff on image and emotion that I keep talking about to my friends

I selected two quotes from scholars who have been studying the topic of the black box, both refer to the black box using the example of the complex machine.

The first one is a quote by Bruno Latour about blackboxing:

«the way scientific and technical work is made invisible by its own success. when a machine runs efficiently, when a matter of fact is settled, one need focus only on its inputs and outputs and not on its internal complexity. thus, paradoxically, the more science and technology succeed, the more opaque and obscure they become.”

And the second is by Peter Sloterdijk which is very complementary to the previous one, he speaks about:

“users who are happy with being just users (…) be smart, be an idiot, this is the motto of the new black box ethic”

At some point in history we stopped understanding how technology works, I think my mother can explain to me the way photography or analog cinema work, it’s relatively easy to understand what a light-sensitive photo paper does, but probably not the operations of a digital camera with all its circuits within.

-the human consciousness and the complex machine-

So here we are with these two black boxes: the human consciousness and the complex machine.

Some men, maybe in this very room could say “but I know exactly how a computer works, that’s not a black box for me”, some psychologists could say the same about the human consciousness, that they know every detail about it

Well, I prefer to have an approach in which we admit that we do not know everything, that our life is full of black boxes, full of obscurities. And that it is through a hacking approach how we travel, never fully decipher, these obscurities. To me, hacking has to do with playing within these black boxes and eventually alter the expected outcomes.

Hacking is a knowledge production system and could be applied to any kind of black box.

Probably there’s some people who thinks that someone who studied computer science and know how digital devices work is a hacker, it’s alright for them but for this particular project of mine I will consider hacking everything that, with a sense of play, alters the obscurities of our environment, this is why the concept of black box is useful.

-magic, the mother of technology-

In shamanic sessions weird stuff happens, when the human being is in an altered state of mind, the things you see do not look rational.

Same with hacking, if a website is hacked, the visitors, even the sysadmins will not understand easily what happened there.

I’m not afraid to use the concept of magic, because it allow us to be imaginative on what we can do through a hacker-shamanic approach.

So let’s go to the core of this comparative analysis.

To do this study I used the following books: Shamanism, Archaic Techniques of Ecstasy by the Romanian scholar Mircea Eliade, this is considered the largest and most validated study on shamans, and for the case of hackers I used the excellent book Coding Freedom by Gabriella Coleman.

And these are the most relevant comparative points between these two figures and their practices: 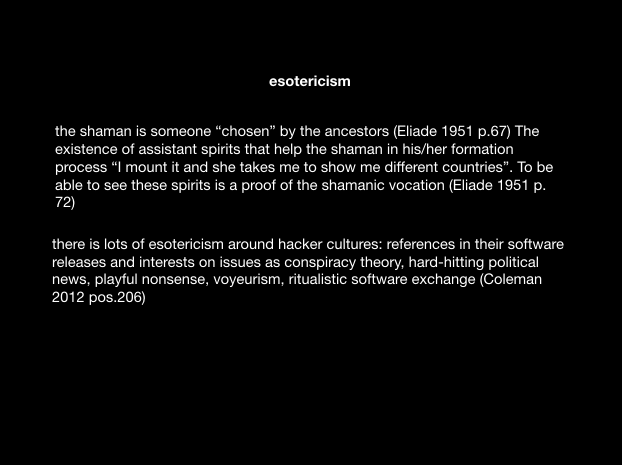 (the image below is the hacker zodiac and i was so lucky to meet the author at HOPE :) ) 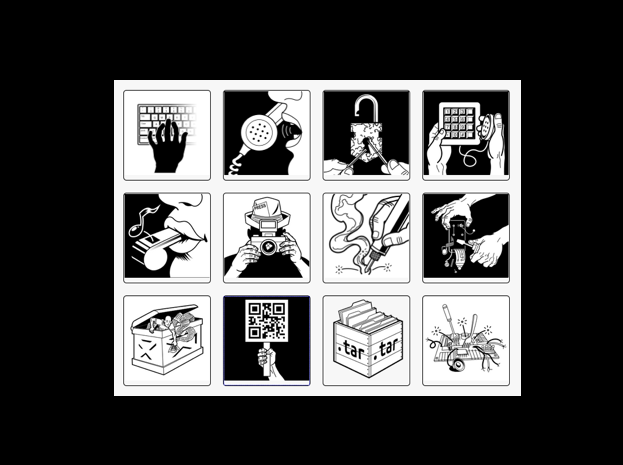 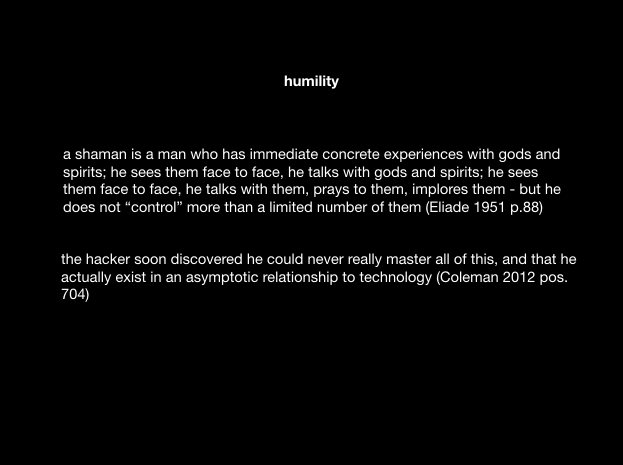 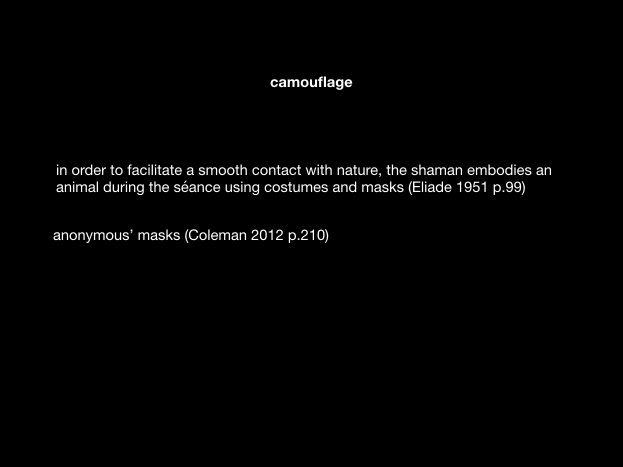 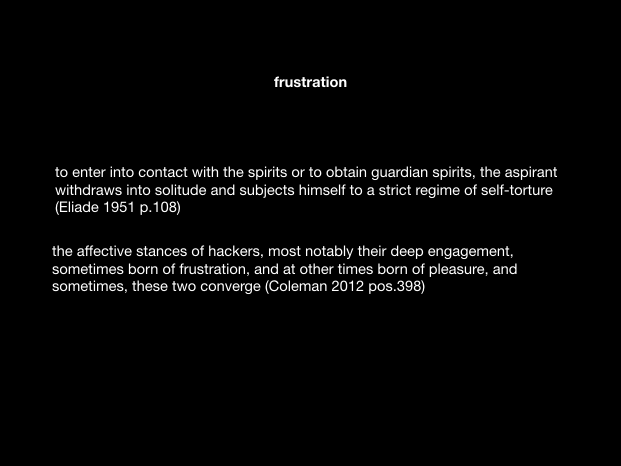 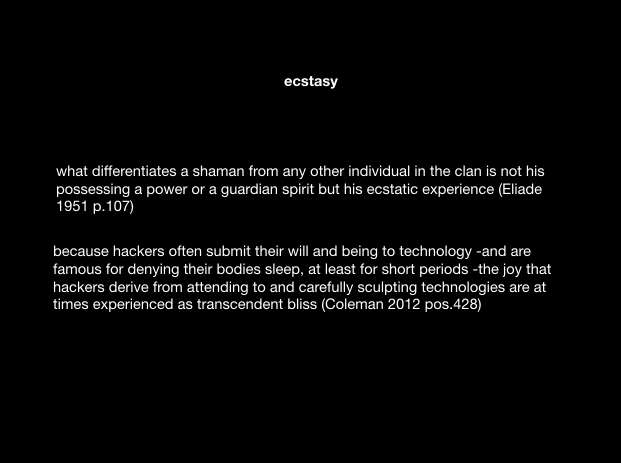 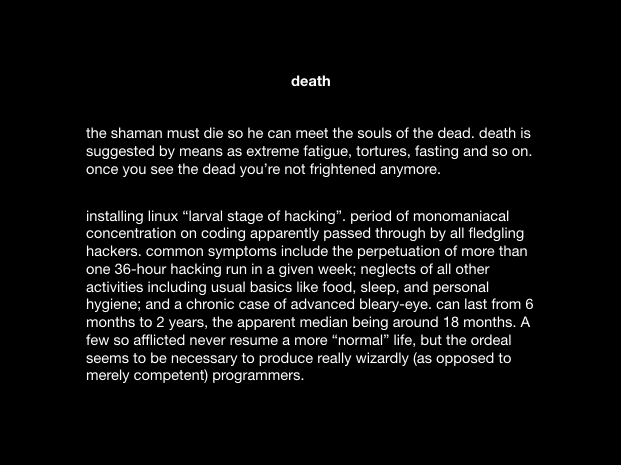 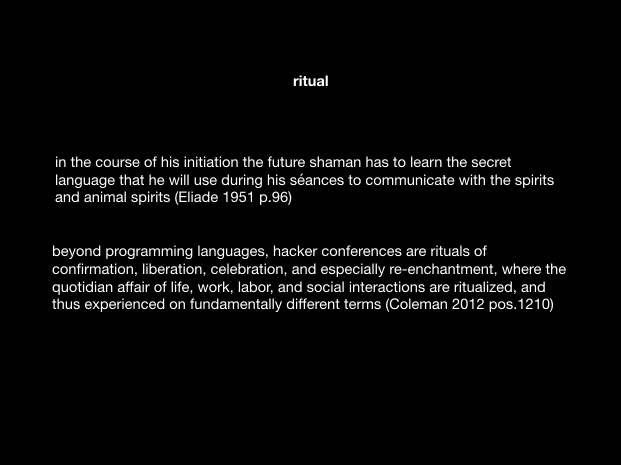 I don’t want to tell you what to think anymore, now I only want you to look at these images and hear these sounds, also look around you and see if this way of thinking make sense to you, if magic, if the idea of magic inspires you to hack everything around you

And I want to finish this presentation with a quote of Nani Balestrini about code, it can be found in the catalogue of Jean Francois Lyotard’s exhibition Les Immateriaux.

To hack is to travel through obscurity, to melt within the light, to embrace blurriness.

Un comentario en «The hacker and the shaman, travelers of the black box»